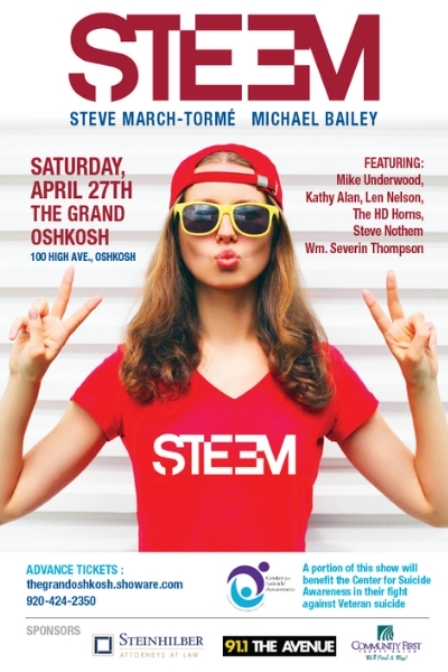 Presented by STEINHILBER-- Attorneys at Law

Here’s a musical recipe for you: take one part Michael Bailey, founding member of the most in demand band for the last 30 years in Wisconsin, Vic Ferrari. Throw in jazz/pop singer Steve March-Tormé from California as your two main ingredients. Now vigorously mix in a crackerjack, three piece horn section, a rhythm section tighter than your brother-in-law’s wallet, guest artists from time to time and a playlist that includes Stevie Wonder, Elton John, The Beatles, Chicago, Hall & Oates, Van Morrison and Crosby, Stills & Nash. What do you get? WELL WHAT DO YOU THINK??!!
You get STEEM!!!!!
And why do you want to come to one of their concerts, besides the fact that you’re gonna just gonna dig it??!! Because they’re pretty dang FUN!!! That’s why!!!
Don’t miss STEEM, coming to a stage near you!!

A portion of this show will benefit the Center for Suicide Awareness.